Friends a lot has been written and said about this topic.

What does it really mean? Simply put, to be conscious, aware and in the present with all our senses. 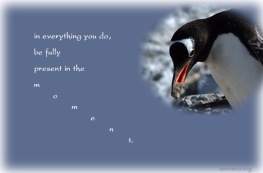 Really do we actually do that every moment that we are awake? Do we actually stretch, if so how much? Are we really giving our best every second of our life…. Are we at the Cutting Edge”.

It is interesting that ship are built with compartments. Why? In the event the ship does take in water, it’s possible to seal away damage sections of the ship, thus eliminating a capsize

Similarly our past, present and future are compartments, which if removed would seize the body and mind instantaneously. We live in these compartments, then why should we not isolate the compartments and live in the NOW to the fullest. Habits has caused us to sway. Similarly we could sway back with corrective habits. So, whilst in the moment, we need to practice and give it our most and all. The best way to pay for a moment is to enjoy it to the fullest ……

Professed simply by Swami Sivananda; “putting our heart, mind and soul into even the smallest of acts is success.”

Salutation to the Dawn.

Look to this day!
For it is life, the very life of life,
In its brief course
Lie all the varieties and realities of your existence:

The bliss of growth
The glory of action
The splendor of beauty.

For yesterday is but a dream
And tomorrow is only a vision,
But today well lived makes every yesterday a dream of happiness
And every tomorrow a vision of hope.
Look well therefore, to this day!
Such is salutation to the dawn.

Posted by davidnair on August 21, 2014 in Thoughts

As 2013 came to an end, many would have gone through a reflective period thinking what are my plans for 2014?

As we ventured into the process of set resolutions, goals, and plans for the coming year, a thought or two would float into our mind … for some it will go this way, hello, you did the same as you closed the year 2012, and were planning to move into 2013. The same would have happened for the previous year, and the previous year. What is going to make this year any different. So why go through the process of setting goals… What is so different in 2014 to make the effort of setting goals?

The logically reasons are plentiful, it will give the drive, the motivation, the clarity, etc., etc., etc… the list is endless.

Very frankly in today’s approach none of this will cement a solid goal setting framework for anyone, any year let alone 2014.

Then what would be the most logically next question… How could we live without goals? We were taught by these developmental gurus, to set goals, break it and drive through the year.

Well …. Friends the illogical answer to this logical stance is very simple…

I am going to work through a number of principles and share them over the next few blogs such that the assimilation of these basic fundamentals would put a different approach to setting and achieving your expectations, this year and the coming year.

My approach through this and the next few blogs would be from a holistic approach, with particular focus on emotions and the commonly referred feel factor.

Many would have heard the common catch cry, “Success is the progressive realization of worthwhile dreams and goals”. This is logical; it is a very matter of fact statement. Is this going to take a person far? Success means different to different people. It is like asking for a black forest cake, instead a chocolate cake is provided. Would you settle for it? A resounding no would be the response from most people. So the factor that triggers inside of a person is more than success…

Earl Nightingale reframes this in a slightly different way. To him “happiness is the progressive realization of a worthy ideal, or goal”.

Well, happiness crosses all boundaries. It is from within, it is a flame, it’s the chocolate cream icing, with the strawberries on that black forest cake. Now that happiness sensation is different

and carries more weightage than the success. The latter has body, fullness, feel factor, as opposed to the former being very stereotype, flat and ok so to speak. “I get you,” type of feeling, another success, so what… the inner sensational button to satisfy the basic human need is minimal. This is so succinctly put by Victor Frankl, the founder of logotherapy, “the greatest human need of human being is for a sense of meaning a sense of purpose in Life, an inner unexplainable emotion”  – Happiness.

Look out on my next blog, I will be expanding into Desire mapping and Core Desire feelings as the pressure points for goals Cheers davidnair

Posted by davidnair on January 18, 2014 in Planning & Goal Setting, Thoughts

Words of Wisdom from an Icon

I was going through the Biography of Mother Teresa, and could not go past this passage. Felt the need to share with those who would not have had the privilege of reading the works of this lady.

I found this little passage great to reflect on ….. Be enlightened, find inner peace & serenity, and hope it can help some out there in a similar way.

It is amazing how the switch takes place within each of us by the second. When we are well grounded with steadfast principles that we could hang on to  nothing will swing it either way. Enjoy the extract ……….

Simple basics to lay that platform as we journey through life. Cheers David Nair